The release of President Joe Biden’s budget on Friday was supposed to be the green light for Democrats to go it alone on his $4 trillion infrastructure plan. Instead his party is stalled at the intersection.

Biden will release that long-awaited fiscal year 2022 budget plan on Friday, a crucial first step for congressional Democrats to unlock the legislative powers to pass an infrastructure package without GOP votes.

But as long as the White House and Senate GOP are still talking, those party-line plans are essentially on ice. And while the limbo is testing the patience of many lawmakers in Biden’s party, particularly progressives unwilling to wait longer before moving ahead, other Democrats — including some close to the White House — argue that a deal with the GOP could still be viable.

“I don’t think you have to floor it” on infrastructure, said Sen. Tim Kaine (D-Va.), who argued it’s worth taking “the time to get it right.”

The president plans to meet again with Senate Republicans next week, and told reporters Thursday he had informed lead GOP negotiator Sen. Shelley Moore Capito of West Virginia that “we have to finish this really soon.”

The process is dragging into its third month after Biden first released his plans for revitalizing roads and bridges, and members of Congress who recognize how much legislative scutwork has yet to begin are starting to gently remind the White House that the longer they wait, the longer the president’s ambitious job-creation plan will sit idle.

Sen. Bob Casey (D-Pa.) said it’s been a “good dialogue back and forth” between all parties, “but we’ve got 85 percent of the work yet to be done.”

“I think we’re getting real close to the fish or cut bait time,” he said.

Liberals who say it’s time to kick-start the arcane process that would empower them to pass an infrastructure bill without Republicans, a maneuver known as budget reconciliation, also point out how long it will take once Democrats decide to deploy it.

Sen. Sheldon Whitehouse (D-R.I.) — a member of the Budget Committee charged with setting the gears in motion for reconciliation — argued that using Biden’s 2022 budget to move ahead now would apply pressure on bipartisan talks.

“The sooner the better,” he said. “And I think it actually helps the talking stay real when we’re proceeding in the other lane. Because once the Republicans determine that by talking they can stop progress, it gives them this huge incentive to delay.”

The pace of progress on Biden’s infrastructure proposal, which would direct massive amounts of spending toward clean energy, broadband and child care as well as more traditional concrete projects, looks far different from when he first took office. Just four months ago, Democrats raced to launch their first shot at reconciliation with a clear mandate to deliver trillions of dollars in pandemic aid to buoy an ailing economy.

Even so, Democratic leaders have a bit of extra time: Both chambers are out of town next week for the Memorial Day recess and the House won’t return until the week of June 14. Even when the chamber does return, Speaker Nancy Pelosi and her lieutenants aren’t expected to move toward reconciliation if Biden’s talks with Republicans are still ongoing, according to several Democratic sources.

On the left, many Democrats privately wager that the Biden-GOP talks will falter in the next few weeks, if not sooner. They note that the two sides are still more than $1.5 trillion apart in new spending, and argue that Democrats’ only chance at delivering an ambitious infrastructure bill is to stop entertaining Republican proposals that would only go smaller.

“At some point we say this isn’t coming together and we need to get this done,” said Sen. Mazie Hirono (D-Hawaii) earlier this week. “So I think there are already some discussions about the reconciliation process and what we could cover.”

If the negotiations do tank before the House returns in mid-June, the timeline would still be tight: Pelosi has said she hopes to vote on infrastructure before the July 4 recess. Senate Majority Leader Chuck Schumer, too, said this week that Democrats would “move forward” in July “regardless of the vehicle” — whether it’s a bipartisan measure, a reconciliation bill or an attempt to split the massive proposal into multiple parts.

Many Democrats in the House have long predicted that their party would ultimately move on without Republicans, like they did with Covid relief, as Biden and Senate Republicans remain miles apart on central questions like how to pay for the package. And they say Democrats will need to get off the blocks soon in order to pass something by the August recess.

Sen. Chris Coons (D-Del.), a close Biden ally, said he’s encouraged both sides are still talking but acknowledged that “patience in my caucus with this process is running out.” 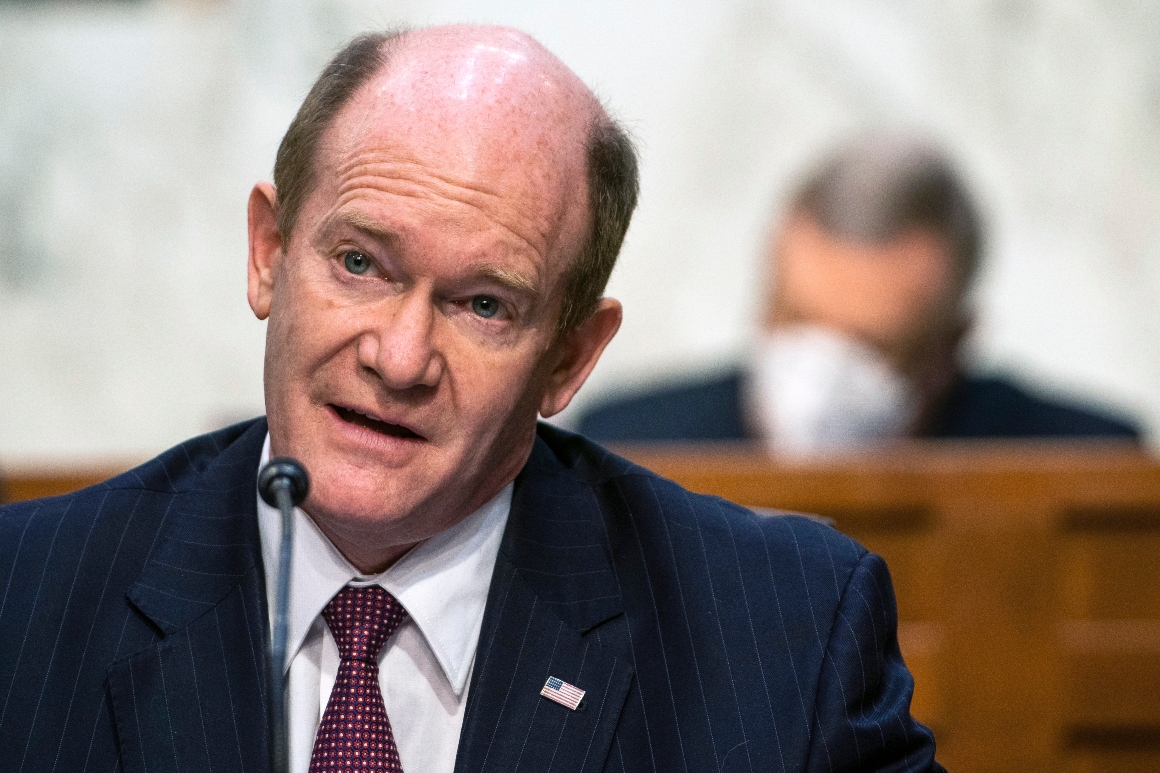 “We need to have a pathway towards closing a bipartisan deal or moving ahead on a Democrats-only basis,” Coons said. “And I expect in the week that we will be on recess, leadership in our caucus and leadership in the White House will assess that.”

Even if they move ahead without the GOP, reconciliation is no simple step. The process would start with a floor vote on Democrats’ budget resolution — a roadmap shaped after Friday’s White House budget release that sets funding levels for the next fiscal year and will likely be tricky to pass given the party’s tight margins in both chambers.

That resolution would task congressional committees with so-called “instructions” that effectively empower reconciliation, which will necessitate hours upon hours of committee work and debate in the House and Senate. Reconciliation also includes a pair of marathon “vote-a-rama” sessions — an all-night Senate process that virtually every member of Congress loathes.

Working through all of those steps will likely take weeks, and House Budget Chair John Yarmuth (D-Ky.) acknowledged last week that “it is getting late.”

“We never thought the president’s budget was going to be this late and that they’d negotiate this long with Republicans,” Yarmuth said.

Biden, too, appears to be feeling the pressure. “We’re going to have to close this down soon,” he told reporters Thursday.

Democrats have their reasons for moving more slowly than they did on coronavirus relief. Biden’s second legislative priority comes with less urgency than his first, which largely focused on fighting a then-raging pandemic. But his party also has a jam-packed schedule this summer, which also includes a must-pass debt ceiling bill and the resolution of expiring Covid-era unemployment benefits.

That’s on top of the Senate’s need to keep confirming Biden’s nominees and its hopes to vote on Democrats’ signature ethics and elections bill.

Not every Democrat is willing to wait much longer.

“You just can’t talk — month after month after month — and go no place,” said Senate Budget Chair Bernie Sanders (I-Vt.). “I think the time is reaching an end. And if Republicans are not prepared to be serious about addressing the major crises we face, we go forward through reconciliation and do it alone.”

Jennifer Scholtes contributed to this report.