Home / Politics / From judge to justice in 6 weeks: How Schumer got Jackson confirmed

Chuck Schumer and Dick Durbin knew exactly when Ketanji Brown Jackson would be confirmed, even weeks before President Joe Biden made his choice: by April 8.

With a fragile 50-50 Democratic majority and an unpredictable pandemic, the majority leader and Judiciary Committee chair mapped out a strategy that went from nomination to confirmation in a six-week sprint, with zero breaks and a specific target date that they decided upon way back in late January. It’s rare for Senate leaders to meet self-prescribed deadlines for huge votes, but Jackson’s historic ascension to become the first Black female Supreme Court justice essentially went through without a hitch.

During the selection process, Schumer even suggested to White House chief of staff Ron Klain that Jackson would be the best option to get confirmed over the other names on Biden’s short list, according to a source familiar with the conversation.

“We called [Biden] early on and said, ‘We’ve got to get a nominee quickly, the longer we wait, the tougher it’s going to be,’” Schumer recalled in an interview.

The idea of a lightning quick confirmation didn’t sit well with everyone in the caucus. But “when you have 50 senators, you can’t delay. A lot of people wanted to delay until June, until [retiring Justice Stephen] Breyer was actually stepping down,” Schumer added.

That was never an option for Schumer. And as the majority leader and a longtime member of the Judiciary Committee, the New Yorker’s fingerprints are all over Jackson’s confirmation. For Schumer, confirming her to the Supreme Court was “at the very top of the list” of his achievements with Biden, a pinnacle of his decadeslong work to diversify the bench.

Unlike top Democratic legislative priorities, the support of Sens. Joe Manchin (D-W.Va.) and Kyrsten Sinema (D-Ariz.) for Jackson was never really in doubt. Nonetheless, Schumer took a hands-off approach and directly told Manchin to vote his conscience. And Republican attacks only strengthened the Democratic resolve to approve Jackson.

Ultimately, the biggest question for Jackson wasn’t whether she’d be confirmed, but how many Republican votes she’d receive. On Monday, the White House finally got an answer: Three, a bigger bipartisan margin than the two most recent Supreme Court justices, despite the slimmest Senate majority in 20 years.

The White House pushed early for Republican support, with Biden personally calling several GOP senators, including Sens. Susan Collins of Maine, Lisa Murkowski of Alaska and Mitt Romney of Utah, all of whom voted to support Jackson. Jackson met with a total of 97 senators, according to a White House official.

Collins met with Jackson twice and spent hours on the phone with White House counsel Dana Remus before announcing her decision, about a week before the final vote. Collins’ support removed the possibility of a tied vote on the Senate floor.

Murkowski and Romney had their own timeline. In an interview, Murkowski recalled that she spoke to Biden “a couple times” before he announced his pick. And she talked to Jackson on the phone over the weekend. In the end, Murkowski decided to support her after going for an only-in-Alaska hike.

“I was home, where I can think and get clarity and clear-headed and not be swirled up with the politics of the matter,” the Alaska Republican said. “So I went out on a really good spring hike — where there was a warning that a bear had taken down a moose just off the trail — so ‘be alert.’ So you’re in a place where you can kind of just take all that in. So that’s how I do it.”

Romney also decided to vote for Jackson over the weekend, recalling that when the president spoke to him about the Supreme Court vacancy, Biden asked if the Utah Republican “had any perspective on the people that’d be considered.” Romney mentioned another potential nominee: Judge J. Michelle Childs, a South Carolina district court judge who Sen. Lindsey Graham (R-S.C.) and Rep. Jim Clyburn (D-S.C.) were publicly pushing.

“I told them I thought Judge Childs had the best prospects of being confirmed. But that I would take a deep dive and a careful look at whoever he nominated,” Romney said.

Graham supported Jackson for the lower court, but signaled early on he’d oppose her for the Supreme Court. While he lamented that the White House chose Jackson, many Democrats thought his public push for Childs backfired. Graham chalked up his public advocacy for Childs to Clyburn, who asked him directly if he could support her: “And I said ‘yeah, enthusiastically.’”

Republicans didn’t exactly make Jackson’s confirmation a cake walk for Democrats, even though she wouldn’t shift the 6-3 conservative balance of the court. In preparation for her confirmation, Chuck Grassley’s (R-Iowa) team requested transcripts from her time on the D.C. district court, which would form the basis of Republican questioning about her sentencing record, including on child pornography and drug cases, according to a GOP Senate aide.

Still, Durbin’s relationship with Grassley, the top Republican on the Judiciary Committee, maintained a relatively smooth process, other than haggling over GOP document requests. Democrats said most Republicans treated Jackson with respect, despite aggressive questioning from GOP Sens. Josh Hawley of Missouri, Ted Cruz of Texas, Marsha Blackburn of Tennessee, Tom Cotton of Arkansas and Graham.

Incredibly, the biggest impediment to her Thursday confirmation was up in the air — literally. On Monday, Durbin received a call around 7 a.m. from his chief of staff informing him that Sen. Alex Padilla’s (D-Calif.) plane was delayed, briefly postponing a key committee vote. Durbin immediately called Grassley with the news.

“I didn’t know what it meant. If he didn’t come in on Monday, it would have delayed the whole Senate a day,” Durbin said. ”I was on the phone, obviously with Chuck Schumer, but Chuck Grassley was my first call.” Ultimately, Padilla arrived around 4 p.m. and the process stayed on track, only delayed by a few hours.

For Schumer, Jackson is a culmination of his goal to see a more diverse high court. Even before former President Barack Obama had his first Supreme Court vacancy, Schumer recommended nominating Sonia Sotomayor, then a New York circuit court judge, to the high court.

“We’ve had a record, Biden and I,” Schumer said. “The people we’ve approved are people of color, and the majority are women.”

The Senate so far has confirmed 58 district and circuit court judges, outpacing other recent presidents on lower court nominees. More than 60 percent of those judges were people of color. 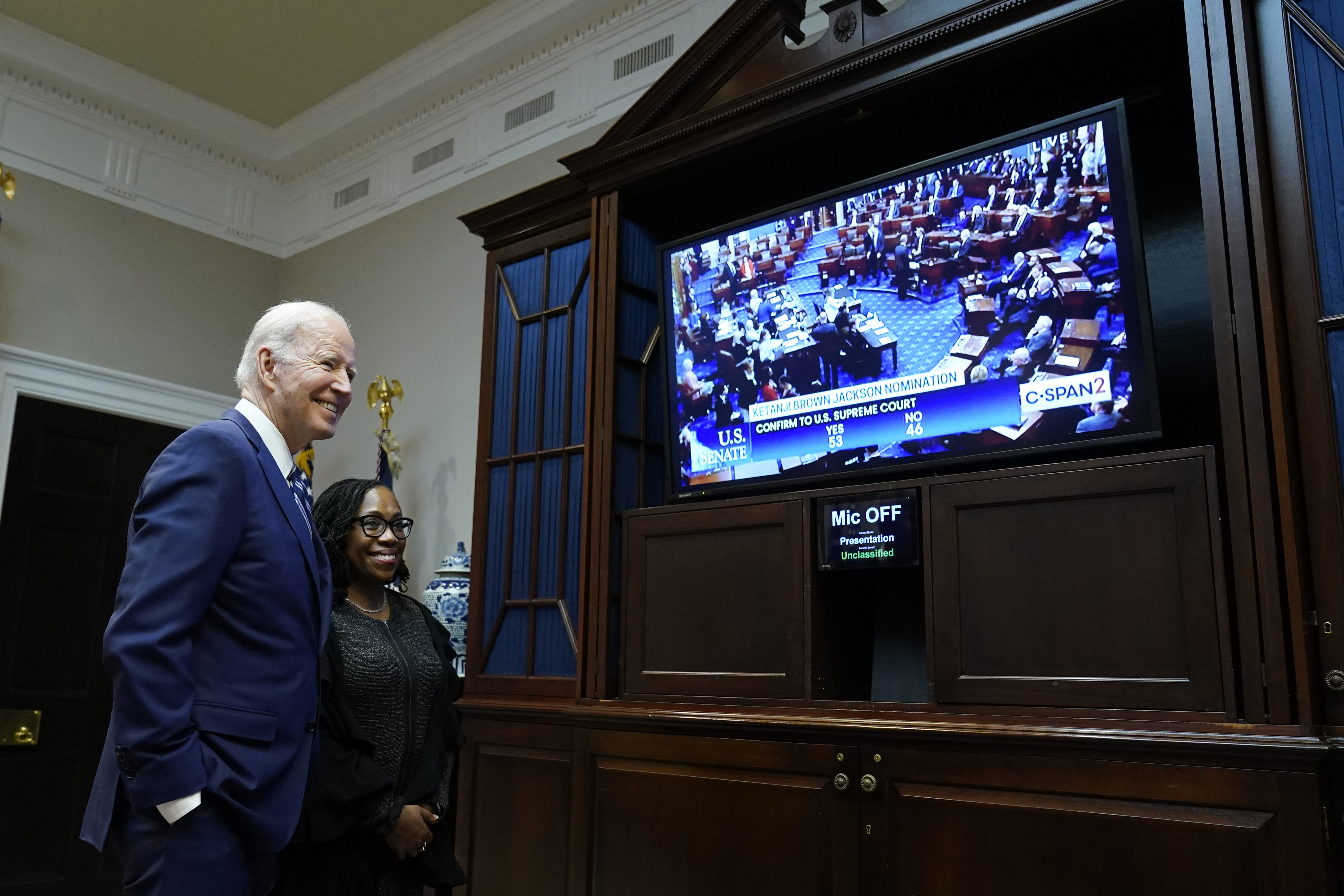 Jackson’s confirmation came at an opportune time for Biden and Schumer, as Democrats face political headwinds across the board. Biden’s poll numbers are near an all-time low, inflation remains high and Democrats are struggling to revive their domestic tax and spending bill. After months of headlines about internal fights, Jackson’s nomination unified the party, highlighting that confirming high-profile nominees can be an easier lift than legislating.

But Jackson’s Supreme Court proceedings also raise concerns about the future. In the end, Supreme Court nominees — from either party — may never break the old 60-vote threshold. After all, only one out of three of former President Donald Trump’s Supreme Court picks, Neil Gorsuch, received support from more than one senator from the minority party.

Not to mention the possibility that Republicans retake the Senate, giving a potential Majority Leader Mitch McConnell the ability to block another Democratic president from filling a Supreme Court vacancy. Schumer didn’t mince words on that prospect in 2023 or 2024: “I worry.”