Marjorie Taylor Greene and Lauren Boebert look from the outside like MAGA twins, both loathed by Democrats for their incendiary right-wing rhetoric. But inside the House GOP, they’re not quite buddy-buddy.

Privately, Republicans say Boebert (R-Colo.) — who’s seen as more of a party team player than Greene — detests being tied to her Georgia colleague. And when the House Freedom Caucus board of directors gathered last month at its usual spot a few blocks from the Capitol, the two tangled over Greene’s appearance at a February event organized by a known white nationalist.

Their confrontation grew so heated that at least one onlooker feared the Greene-Boebert back-and-forth might escalate beyond the verbal cage match had another board member not stepped in to de-escalate, according to a GOP lawmaker who was granted anonymity to describe what happened. The incident was confirmed by three people connected to the Freedom Caucus, whose members largely avoided public criticism of Greene and Rep. Paul Gosar (R-Ariz.) at the time and focused their discontent on the event organizer, Nick Fuentes.

The run-in between Greene and Boebert is a microcosm of a bigger identity crisis that’s starting to take hold within the Freedom Caucus. A group founded with right-leaning policy ambition that later became a Donald Trump defense team is starting to split in important ways, from how to respond to this week’s Kevin McCarthy tapes to — more fundamentally — whether to reorient itself back to its limited-government roots.

“We need to reevaluate where we’re heading,” Rep. Scott DesJarlais (R-Tenn.), a current but less active group member, said in an interview. “I like the principles that the Freedom Caucus was founded on, but I think that if we can’t work together as a group and push our ideas in a civil manner, then we’re not going to be very effective.”

Interviews with more than 40 Republicans — including 30 lawmakers, 16 of them in the Freedom Caucus — paint a picture of a group that shapeshifted as the GOP itself realigned during Trump’s presidency, becoming more populist and nationalist, but less bound by policy principles. 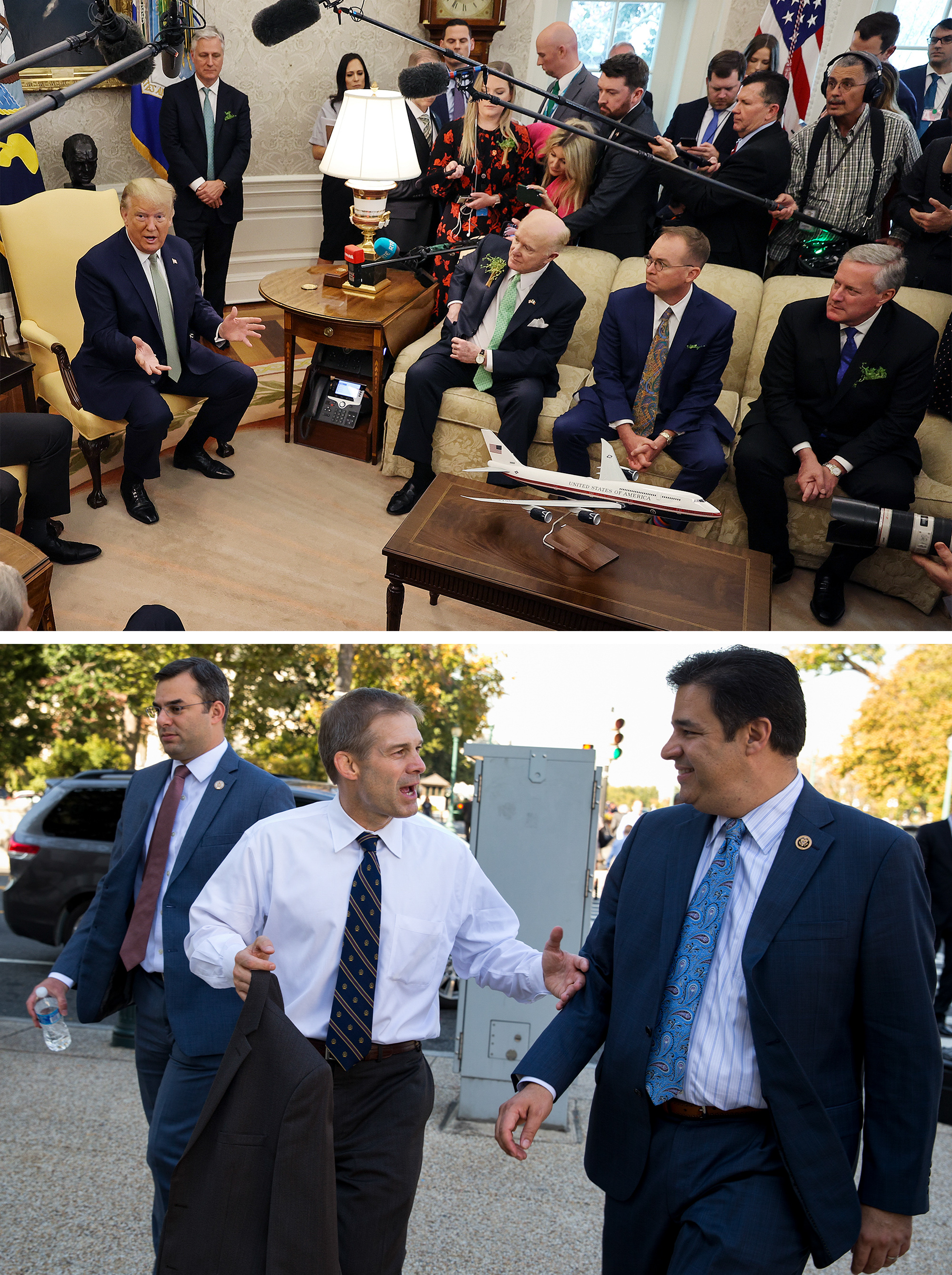 Some of the people closest to the group’s complicated origin story warn that if it doesn’t return to its roots, moving away from firebrands is more likely to cause a stir than sponsor a bill, its influence risks waning just as the GOP reclaims the majority.

The Freedom Caucus launched in 2015 with a vow to promote “open, accountable and limited government, the Constitution and the rule of law, and policies that promote the liberty, safety and prosperity of all Americans.” Members had to be willing to oppose a House rule, the most blatant form of opposing party leaders when they felt conservative principles were being ignored. But they were also expected to back leadership on stopgap spending bills to prevent government shutdowns.

The group regularly tormented former Speaker John Boehner, ultimately giving him the biggest shove into retirement — a feat the current chair considers one of its defining accomplishments. Boehner’s successor as speaker, Paul Ryan, had his own share of frustrations with the Freedom Caucus before calling it quits.

The current frontrunner for speaker in 2023, McCarthy, has taken daggers from the group himself and become more responsive to its demands as a result.

But it’s unclear what’s in store for the House minority leader from the Freedom Caucus if he lands the gavel next year. No one is sure what to expect — not even some of its own members.

Some of its old-school founding members would prefer the group pick policy battles to push the GOP further right and consider strategic alliances with party leaders who’d prefer to train their fire on Joe Biden — rather than revert to Boehner- or even Trump-era form.

Within the House GOP, other Freedom Caucus critics already have their minds made up about the group’s future.

“Their identity really kind of got shook up in the Trump years,” Rep. Mike Rogers (R-Ala.), who’s not a member, said in a recent interview. “The party is different.” 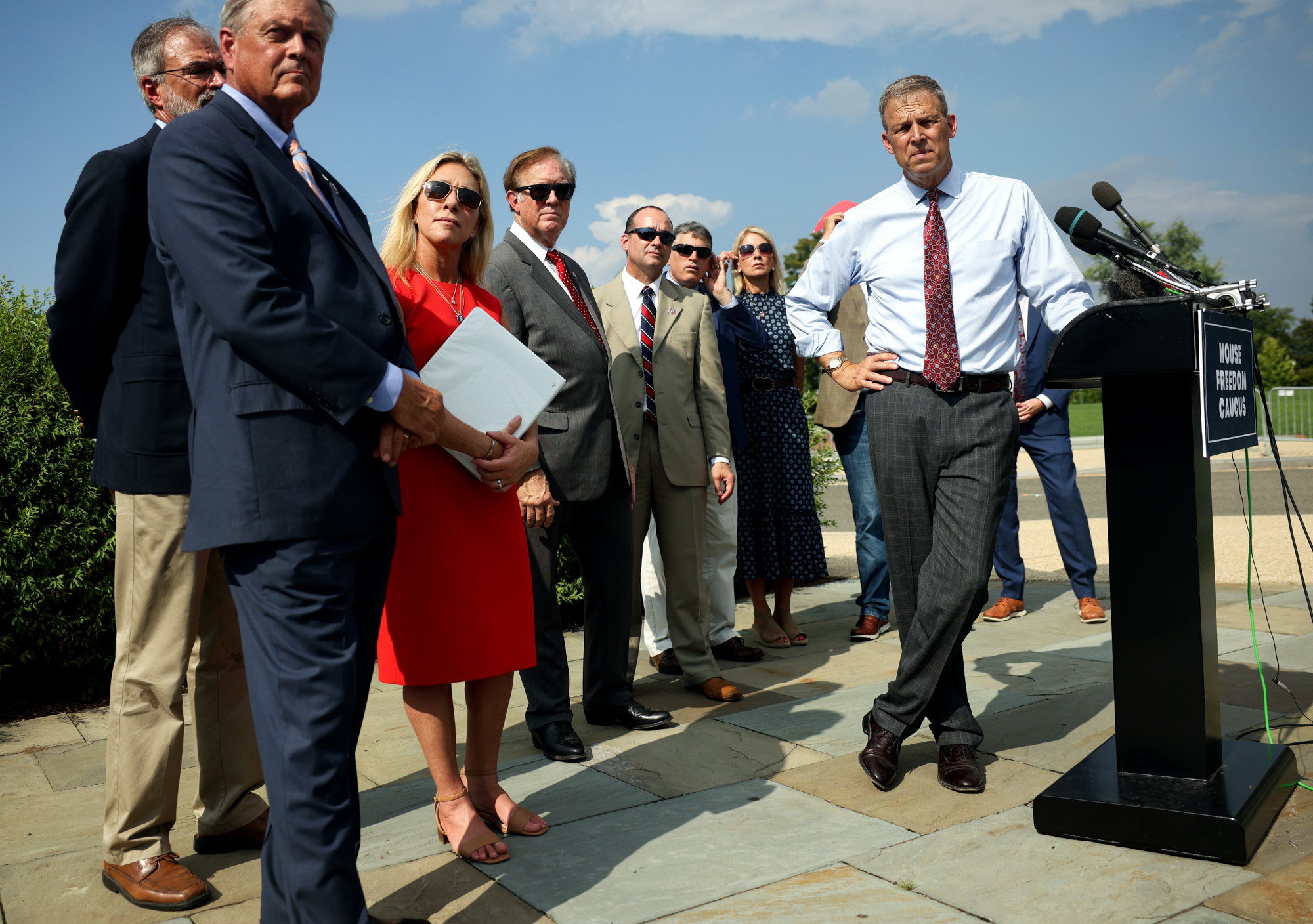 “When we’re back in the majority, they’re going to go right back to their bad habits,” Rogers said. “At least the militant wing of that group will become obstructionist again.”

A group text, and the McCarthy tapes

Freedom Caucus members know how to defend each other against intra-party attacks.

When Rep. Rodney Davis called his fellow Illinois Republican Rep. Mary Miller a “carpetbagger,” for example, Rep. Lauren Boebert (R-Colo.) took to the Freedom Caucus’ group text thread in frustration. (Miller is in the Freedom Caucus, while Davis — her opponent in a fierce primary battle for a newly redrawn district — is not.)

According to one Republican on the thread, Boebert asked her colleagues: “When McCarthy threatened us to not attack Republicans, did he mean Rodney Davis too? Or just HFC?”

When it comes to McCarthy’s recorded harsh remarks about some pro-Trump conservatives’ fire-breathing in the runup to and wake of the Capitol attack, Freedom Caucus members haven’t aired as many grievances. Both Boebert and Greene, who were mentioned in private conversations among House GOP leaders after Jan. 6, declined to criticize him this week.

The ultra-conservative group’s relative quiet toward McCarthy shouldn’t be mistaken as an all-out dismissal of the drama that’s surrounded him. Within the Freedom Caucus, some are taking a wait-and-see approach as both the former president and their base voters appear unruffled by McCarthy’s earlier closed-door frustration with his right flank.

Others are simply staying mum as the group prepares to seek concessions from senior Republicans if the party wins the House this fall. All are keeping their eyes out for future revelations that may emerge about the GOP leader.

But not every Freedom Caucus member is holding fire. Biggs said Thursday night on his personal podcast that if McCarthy “needs to be a different leader than he is today” if he’s going to be speaker.

And Rep. Matt Rosendale (R-Mont.) told POLITICO that the leaked audio hurts McCarthy’s credibility, citing his later-debunked denial of a tape that showed him musing about a call for Trump to resign. 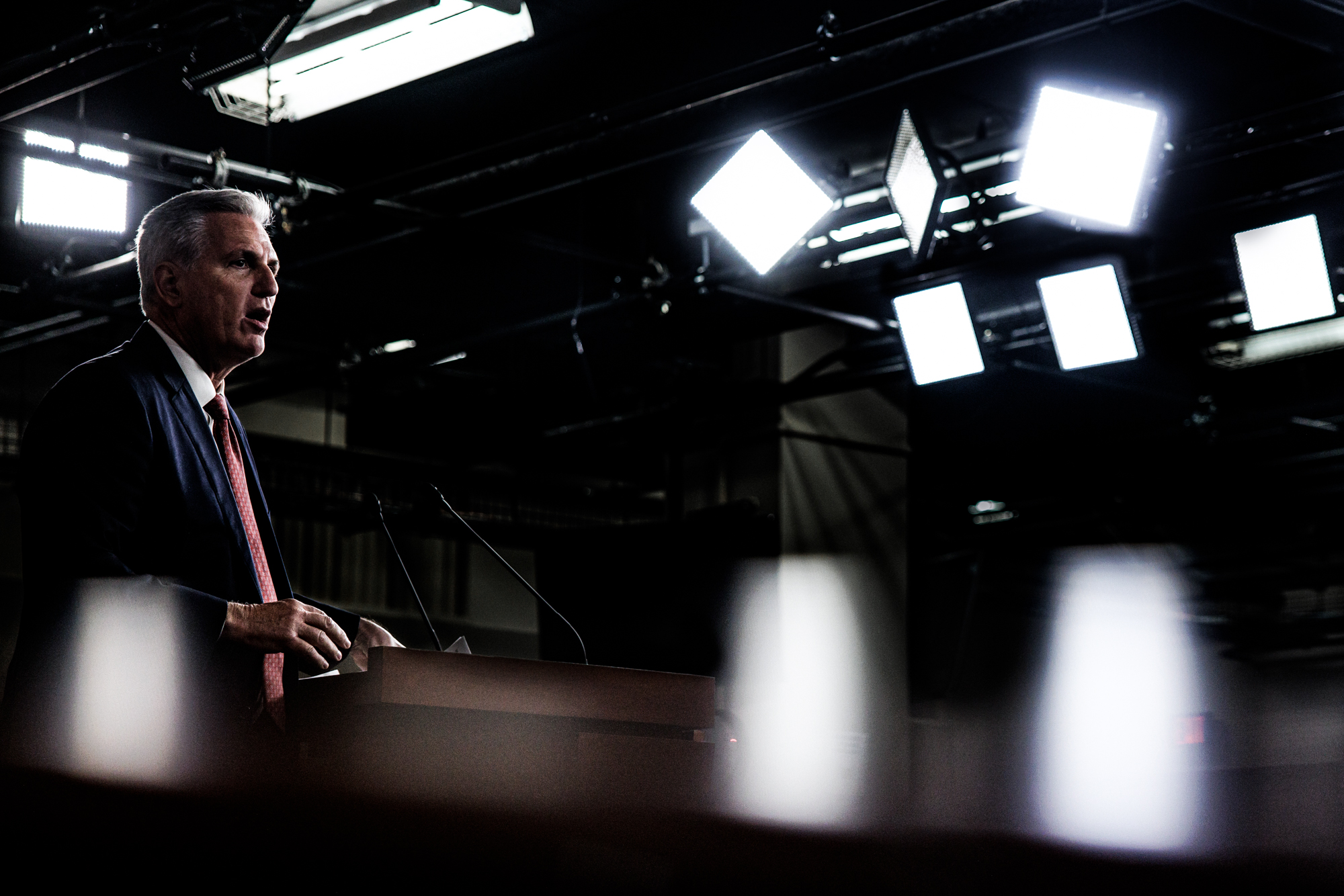 “I don’t see how you can deny that it happened when it’s out there,” Rosendale said.

The tension and the counterpoint

The Freedom Caucus has experienced other cracks in unity this Congress. Members split last year over the GOP’s floor strategy, chiefly whether to stop Democrats from quickly passing noncontroversial legislation.

The disagreement laid bare one big challenge the group will face next year: when to act as a unit. While some in the Freedom Caucus embraced last year’s floor sabotage, it rarely if ever was an official group position, which requires 80 percent of members’ support to adopt.

“When we take a position, we’re unified,” said Biggs, the former Freedom Caucus chair. “But we don’t take as many official positions as people think we do.”

GOP leaders have urged their entire conference to focus on Democrats rather than undercut one another. Yet unity is never easy with margins as tight as they are in the House and newer members stocking the Freedom Caucus ranks — conservatives who have never known a pre-McCarthy leadership team.

Members are aware that it’s not clear how much sway they will have over McCarthy in a future Republican majority. Some predict that the bigger the margin of victory they secure in November, the more power the next speaker will have to himself.

But “if it’s a slim majority,” said Rep. Jeff Duncan (R-S.C.), outlined the other possible scenario, “leadership can’t afford to lose a lot of Republicans and get things passed.”

In that narrow-majority situation, the Freedom Caucus might well find itself with more room to push its priorities. What those priorities will be months down the line is anyone’s guess.

Things were simpler in 2015 when the group was formed by a handful of Tea Party conservatives who grew weary of the Republican Study Committee. That group was founded as a policy engine for the House right, but it grew to include most of the GOP conference and left some members fearing it had grown too close to leadership. 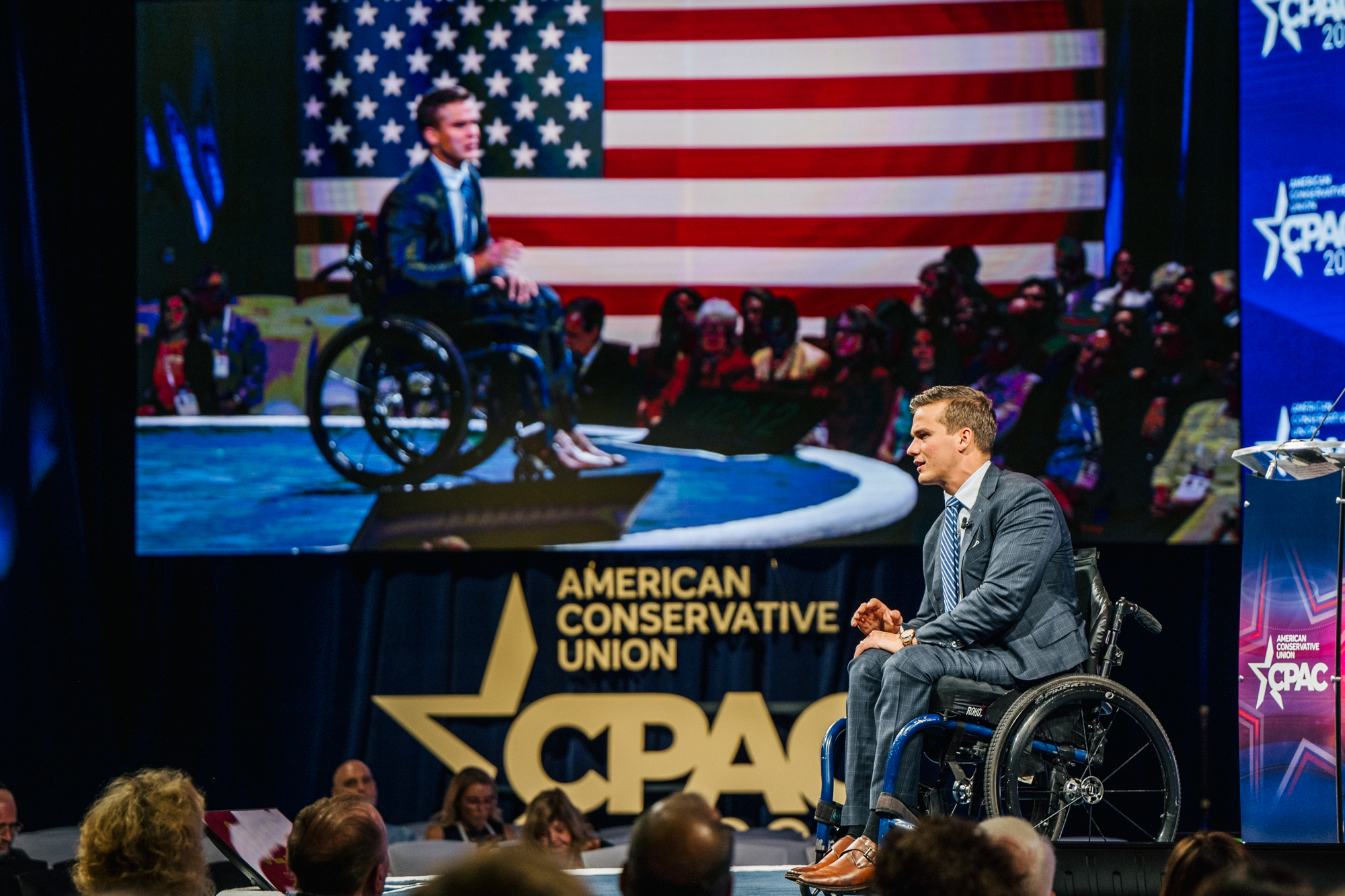 While the Freedom Caucus doesn’t publicly release its roster, it has roughly 35 active current members. That includes several lawmakers whom multiple current and former members say would have been shut out as potential chaos agents if they’d tried to join initially; often pointed to are members like Greene, Boebert and Rep. Madison Cawthorn (R-N.C.).

In part because of those Trump acolytes’ influence, some Republicans say privately that they’re watching to see if the Freedom Caucus ends up becoming what it was designed to correct: a bloated GOP group that lacks cohesion.

Changes within the group over the past couple of years have fomented so much frustration among certain members that at least two have separately entertained the idea of leaving to start offshoot groups, according to two Republicans with firsthand knowledge of those discussions.

Early members like Mulvaney say the group was intended as a nimble strike force, dedicated to pushing legislation to the right but also thoughtful about the fights it picked. However, previous iterations of the Freedom Caucus were undeniably obstructionist when it counted — pushing to shut down the government over repealing Obamacare and building Trump’s border wall.

The Freedom Caucus declined to offer a comment for this story. But multiple members dismissed the idea that it is at odds with itself.

“The basic principles are still the same,” said Rep. Morgan Griffith (R-Va.). “But there are changes in personalities.”

“You can’t expect the organization to stay static,” Griffith added. “Our goal is to move the caucus and the conference to the right and to try to do what we can on policy. And that’s where a lot of us start.”

‘Stuck in the middle with you’

The run-in last month between Greene and Boebert opened a new window into the internal dynamics between two of the group’s highest-profile members, each of whom has their own distinct persona within the party.

Still, not everyone in the Freedom Caucus sees Boebert and Greene as distinct. When both leapt to their feet during President Joe Biden’s State of the Union this year to chant for a border wall — one day after their board-meeting clash — a viral photo captured Rep. Byron Donalds (R-Fla.) sitting between them, looking uncomfortable with the display. 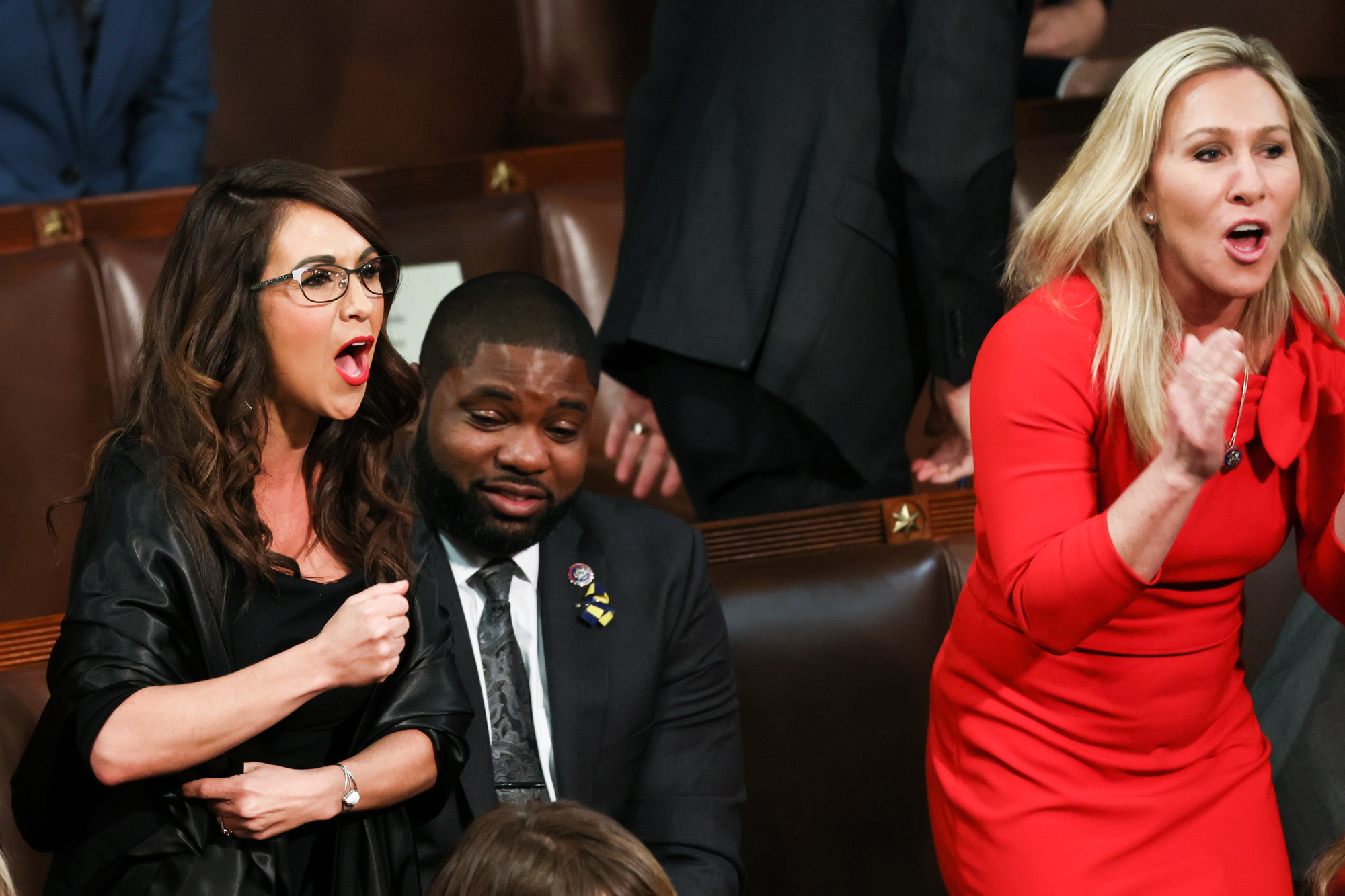 Another Freedom Caucus member, Rep. Ken Buck (R-Colo.), later posted a video that juxtaposed photos of Donalds with lyrics from a famous Stealers Wheel song: “Clowns to the left of me / jokers to the right / here I am, stuck in the middle with you.”

Buck knew full well that the lyrics slammed his colleagues when he posted the video, according to a Republican with knowledge of the decision.