Home / Politics / Republican wave builds to take back the House

Republicans could hardly be better poised to recapture the House majority.

Increasingly aggressive redistricting, a diverse slate of candidates raking in record-breaking amounts of cash and a political atmosphere that just keeps getting more favorable has Democrats watching with a growing sense of dread.

Last week alone, the GOP saw the stirrings of a full-fledged suburban revival from Virginia to New Jersey to New York — and also possibly ended the careers of as many five Democratic incumbents with punishing new congressional maps in three other states.

Republicans were plotting to cement their advantage beneath the surface, too: A top GOP polling firm heard from more potential congressional recruits interested in running for Democratic-held seats last week than it had during the first 10 months of the year. Some 30 moderate Republican incumbents gathered on Capitol Hill to discuss how to replicate Virginia Gov.-elect Glenn Youngkin’s playbook in swing districts across the country. And the largest House Republican super PAC sent a memo to donors vowing to compete in every district redder than Virginia, where President Joe Biden won by 10 points.

“We’ve been seeing it in our polling, but Tuesday’s election was tangible confirmation that the political environment is, in fact, as good as we think it is,” said Dan Conston, the president of the Congressional Leadership Fund, who wrote the memo. “The map has expanded and will continue to expand deep into Democrat territory. We are looking closely at many seats Biden won by more than 7.”

Just three years after they lost the House in an anti-Trump revolt — and with just one year to go until the midterms — Republicans are well poised to reclaim the gavel, barring a drastic shift in the political trade winds, which even the most optimistic Democrats aren’t expecting.

“You have to assume that there is a tide out there that has to be overcome,” said Rep. Kweisi Mfume (D-Md.). “So I don’t know. I’m gonna fight like hell to keep the majority here. But I’m also looking at the reality of it all.”

Lost among the GOP’s election victories in Virginia and elsewhere were three new redistricting proposals in Republican-controlled states that dismantled a handful of Democratic seats.

North Carolina Republicans last week enacted new congressional districts that will doom first-term Democratic Rep. Kathy Manning and places Democratic Rep. G.K. Butterfield in a seat Biden only carried by a few points. The GOP could control as many as 11 of the state’s 14 districts after the 2022 elections.

In Ohio, Republican legislators unveiled draft congressional maps that could reduce Democrats to just two of the state’s 15 districts by 2023. And while the final configuration isn’t set, most party operatives can’t envision a map that would leave intact the seats of Democratic Rep. Tim Ryan — who chose to run for Senate rather than hang around for a brutal redistricting — or Democratic Rep. Marcy Kaptur, whose current district snakes 141 miles along the coast of Lake Erie.

“There’s a very disruptive set of forces at work in Columbus in that legislature,” Kaptur said in an interview, vowing to compete for the Toledo-based seat no matter how red it becomes in a new map. “This one makes mincemeat of more Democratic voters because of the way that they draw the lines.”

If other red states follow Ohio’s lead, Kaptur said, “it would mean that we would have a much harder time retaining any kind of majority here.”

Also last week, New Hampshire Republicans proposed a map that would swing Democratic Rep. Chris Pappas’ district sharply to the right, leaving him in a much redder seat. And Georgia is expected to soon release its new plan that will leave Democratic Reps. Lucy McBath and Carolyn Bourdeaux fighting over just one blue seat in the northern Atlanta suburbs.

Yet even amid all the uncertainty over new districts, the GOP is having no trouble finding candidates to run, avoiding the recruiting holes that doomed the party’s 2020 chances of taking back the House. In total, some 850 candidates have already filed, according to figures tracked by the National Republican Congressional Committee.

“It shows momentum because we’re in a redistricting year,” said Rep. Tom Emmer (R-Minn.), the campaign committee’s chair. “These people are not waiting for lines. And no, we’re not having an issue with people sitting on the fence waiting. We’re having an issue with multiple people showing up in districts that matter.” 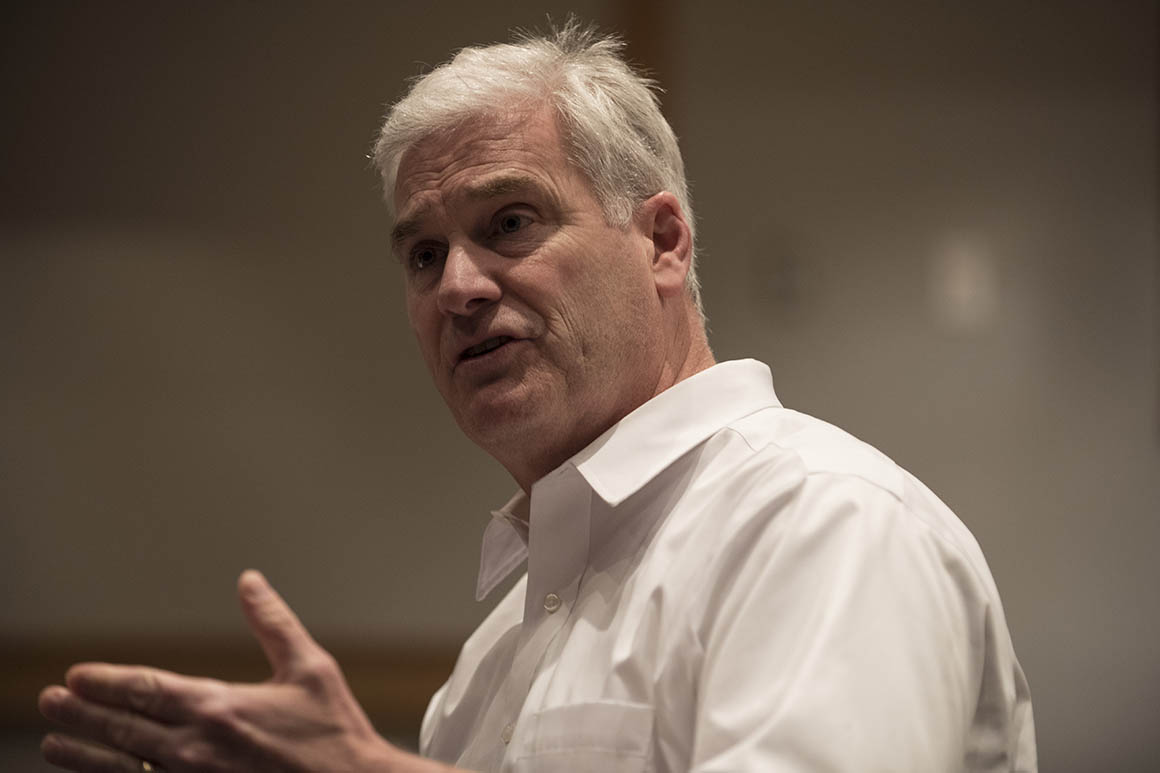 Retirements by Rep. Cheri Bustos (D-Ill.) and Rep. Ron Kind (D-Wis.) — and Rep. Vicente Gonzalez’s decision to run in a neighboring safe seat rather than a swing district that more closely resembles his current South Texas seat — have deprived Democrats of well-funded incumbents for tough races. Wisconsin Republican Derrick Van Orden has banked $1.2 million, and Republican Esther Joy King in Illinois has over $655,000. Meanwhile, no Democratic candidates posted significant fundraising by the end of the third quarter.

There are still a few seats likely to remain competitive after redistricting that are missing a top-tier candidate, but party recruiters said strong contenders are actively considering, even more so after they saw Republicans surge in the off-year elections.

Some anecdotal evidence: Youngkin’s pollster, Chris Wilson of WPA Intelligence, told POLITICO that his firm “has heard from more candidates looking at marginal seats” — those that hadn’t drawn a lot of interest because they lean Democratic — “since Tuesday than we had in the entire preceding ten months of 2021.”

In Michigan, where redistricting is still in flux, former state Attorney General Bill Schuette might run, perhaps against Democratic Rep. Dan Kildee in east-central Michigan, according to two sources familiar with the party’s recruitment efforts. And party leaders are hoping that Republican John James will compete for a Detroit-area seat, and state Sen. Tom Barrett will run for a Lansing-area district.

Another name to watch is Ricky Gill, a former Trump official and Indian American who raised nearly $3 million in a 2012 congressional bid. He is eyeing a bid against the well-financed Democratic Rep. Josh Harder in Northern California.

Party officials are optimistic they will be able to win Democratic-leaning seats — and are already eyeing some newly redrawn ones held by Rep. Henry Cuellar (D-Texas), Rep. Frank Mrvan (D-Ind.) and a new seat in Oregon that Biden carried by between 7 and 9 points. Republican Jimmy Crumpacker, who self-funded a failed 2020 bid for a Republican-leaning district, might run for the new Oregon seat. And Mrvan already faces a challenger with a promising biography: Jennifer-Ruth Green, a Black Air Force veteran.

Republicans are particularly encouraged by Youngkin’s ability to keep the GOP base energized while making inroads in Virginia’s suburbs, particularly around Richmond and Hampton Roads, home to two competitive congressional districts. In his memo to Congressional Leadership Fund donors, Conston touted that Youngkin got 84 percent of Trump 2020 voters to turn out — while Democrat Terry McAuliffe motivated just 65 percent of Biden voters.

In the days after his defeat, Democrats openly questioned McAuliffe’s decision to rely so heavily on tying Youngkin to former President Donald Trump. And the loss helped spur House Democrats to pass a massive infrastructure bill three days later that will give them something new to tout in swing districts next year.

But the Democratic Congressional Campaign Committee, the group charged with protecting a thin majority, may complicate a strategy to steer the message away from Trump.

“Kevin McCarthy and House Republicans are not Glenn Youngkin. Youngkin won by running away from Donald Trump. The House Republicans voted by a two-thirds margin to overturn the election,” said DCCC Chair Sean Patrick Maloney in an interview last week. “If we let them have it both ways,” he added, “it’s a problem.”

The results last week suggested to the GOP, however, that their tent was getting bigger.

Over 30 GOP members in the centrist Republican Main Street Partnership convened Wednesday morning to listen to Republican pollster Dave Sackett debrief on Youngkin’s coalition and other promising signs from the off-year elections. It was additional validation for the group’s strategists, who urged the party at the beginning of this year and reiterated again in a new memo Monday to figure out how to strike a “delicate balance” that could keep both in the fold.

“The best way to do this is to never criticize Donald Trump,” said Sarah Chamberlain, the president and CEO of the partnership, who organized the meeting. “There’s no reason to. Talk about his policies, talk about all the good things that happened, and let the Trump base come out. And then let the suburban people vote for you as well.”