The 50-49 vote, entirely along party lines, came after the Senate remained in session, holding marathon votes for more than 24 hours. Senate Republicans sought to amend the legislation but Senate Democrats largely stuck together to defeat any major changes to the bill.

“A new day has come and we tell the American people help is on the way,” said Senate Majority Leader Chuck Schumer (D-N.Y.), shortly before passage. The bill “is broader, deeper, and more comprehensive in helping working families and lifting people out of poverty than anything Congress has seen or accomplished in a very long time.”

Schumer managed to keep his 50-member caucus largely united throughout the process, but it was not without some last-minute drama: The so-called vote-a-rama session was delayed for more than ten hours on Friday, as Senate Democrats reached a last-minute deal with Sen. Joe Manchin (D-W.Va.) on the coronavirus package’s unemployment insurance benefits.

The legislation will now head back to the House, where it’s expected to be approved next week and sent to Biden’s desk before federal unemployment benefits expire March 14.

Senate Republicans have criticized Democrats for using a process known as budget reconciliation to pass the $1.9 trillion coronavirus relief package along party lines and lambasted the legislation as a poorly targeted effort to pass liberal priorities.

“The Senate has never spent $2 trillion in a more haphazard way,” said Senate Minority Leader Mitch McConnell (R-Ky.). “The voters gave the Democrats the slimmest majority. The voters picked a president who promised bipartisanship. The Democrats’ response is to ram through what they call ‘the most progressive domestic legislation in a generation’ on a razor-thin margin.”

The Senate bill includes several changes from a version that passed the House last week. The House’s legislation included a provision that increased the minimum wage to $15 an hour, which the Senate parliamentarian determined violated Senate rules. While Sen. Bernie Sanders (I-Vt) sought to overrule the parliamentarian and pass the minimum wage hike as an amendment to the package Friday, eight Senate Democrats joined Republicans in voting against it, a sign that it had no chance of passing.

The package also provides 1,400 stimulus checks with tighter eligibility restrictions, $350 billion in aid to state and local governments, and $130 billion to help reopen schools. After lengthy talks with Manchin over the bill’s extra unemployment benefits, Democrats approved an amendment that would provide $300 a week in payments through Sept. 6, rather than the $400 a week through August that the bill originally laid out. The change would also provide up to $10,200 in tax relief for laid off workers for households with incomes under $150,000 a year.

The coronavirus relief package is the first major piece of legislation passed under Schumer’s new Senate majority. While progressives have complained about the Senate’s changes to the legislation, including the removal of the $15 minimum wage, as of now there are no indications that it will run into trouble in the House. 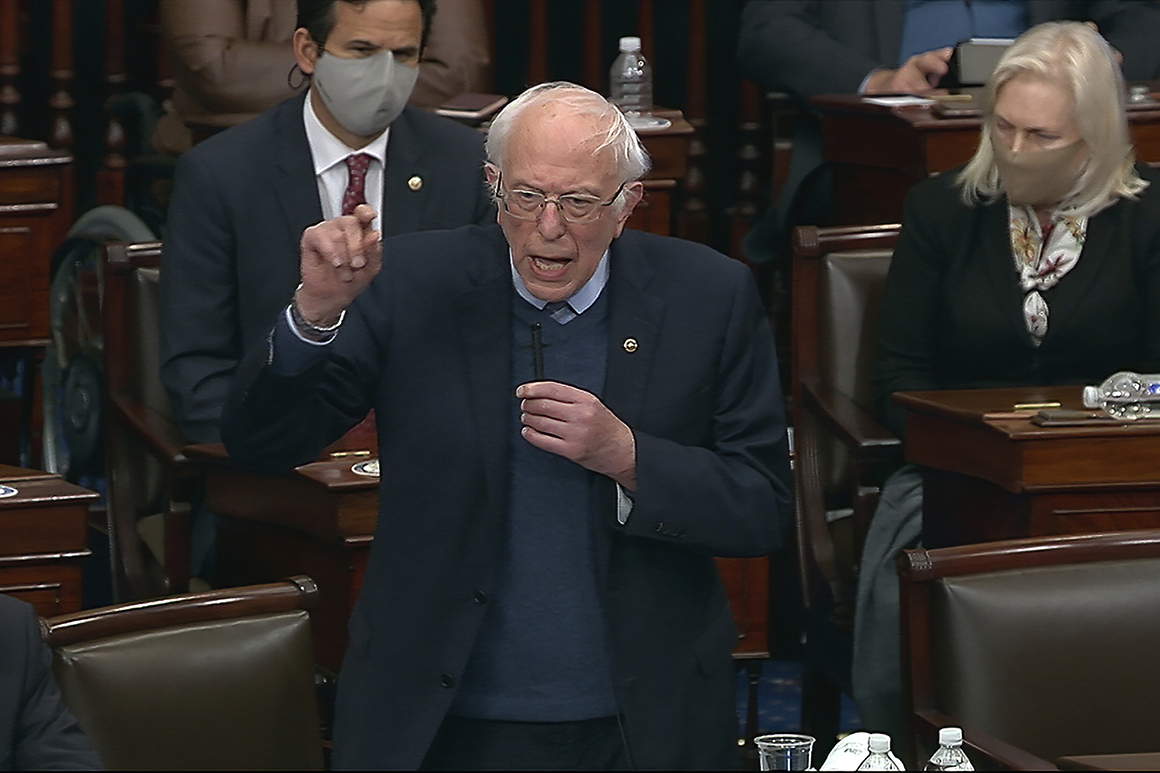 Biden had heavily lobbied Senate Democrats to support his proposal, including participating in their weekly caucus call this past Tuesday. He also held a call with Senate moderates on Monday to discuss ways to target the package and personally called Manchin on Friday, when he appeared to be vacillating between the Democrats’ unemployment insurance proposal and a competing proposal from Sen. Rob Portman (R-Ohio).

While Biden held his first Oval office meeting with a group of moderate Republicans back in February, Democrats and Republicans had starkly different views on the overall price tag of the package. Biden and Senate Democrats repeatedly called for a “big” and “bold” package. But Senate Republicans argued that that much of the money from previous packages remains unspent and that the economy is headed towards recovery.

It was unclear until the final vote tally whether Sen. Lisa Murkowski (R-Alaska) would vote in favor of passing the coronavirus relief package. Murkowski had spent the past week educating Biden administration officials and Senate Democrats about the challenges facing her state, amid the economic and health crisis. But in the end, she joined her party in voting against the bill.

Amid a barrage of messaging amendments meant to squeeze both parties, senators on Saturday morning adopted by voice vote a bipartisan amendment that would direct $800 million to services for homeless children. And almost every senator adopted an amendment that would extend pay relief for federal contractors through the end of September.

In addition to the change to the bill’s unemployment insurance provisions, Senate Democrats also approved an amendment from Sen. Maggie Hassan (D-N.H.) early Saturday morning that requires schools to have a safe return plan for returning students to the classroom within 30 days of receiving aid.

Caitlin Emma and Jennifer Scholtes contributed to this report.