Home / Politics / ‘The world is on fire’: How vulnerable House Dems are bracing for GOP attacks on crime

CULPEPER, Va. — Abigail Spanberger railed against members of her own party for playing into the GOP’s hands on “defund the police” after the 2020 election. This year, she’s not waiting for permission to do it her way.

The days of Democrats’ own base pushing to strip law enforcement resources are mostly behind them, with even President Joe Biden talking up his plans to do the opposite. And while Republicans aren’t yet citing law enforcement funding in the same manner they did in the last election, swing-district Democrats hear echoes of those attacks in the GOP’s focus on rising crime rates and the border crisis.

And Spanberger — who described the “defund” slogan as voters’ top issue in her own 2020 race — is one of many Democrats who worry those hits could prompt even more drastic political casualties than their unexpected losses two years ago.

“I thought that was a terrible idea,” the Virginia Democrat said of the “defund” slogan, which she said obfuscated the meaning of police reform and confused voters.

She and other Democrats are bracing for the GOP onslaught, unwilling to let Republican attacks go unanswered this year. Instead, they’re preemptively correcting the record. Spanberger, who spent years in law enforcement herself, offered a model on how to do that in a recent half-day tour that demonstrated her support for the Culpeper Police Department — speaking to over a dozen officers as they showed off drones and their K-9 unit, followed by a ride-along.

“If your words are ‘defund the police,’ they’re going to think you mean that. And they know the world is on fire,” she said after the police visit, sitting outside a Culpeper coffee shop. “They know things are upside down. They know they’re afraid, they know there’s a pandemic. So why are you going to just say you want to do something that you actually, maybe, don’t want to do?”

Few Democrats expect that crime will be their biggest vulnerability going into November, with the GOP targeting inflation as their top issue. Still, incumbents like Spanberger say it remains a campaign problem and have been intentional about reaching out to law enforcement communities back home.

Spanberger spent her morning in Culpeper addressing the local police department’s morning roll call, touting her legislation to help officers and offering assistance from her district staff. It was familiar territory for Spanberger, whose father had also worked in law enforcement.

“I know that some of what you all contend with is the worst of the worst and the darkest of the darkest in terms of people, the crimes that can be committed or people in their low points and the challenges,” she told the officers.

Spanberger consistently favors confronting problems head on — in her first run to the House in 2018, her campaign disclosed that a Republican PAC had obtained her confidential security clearance application. By the time the PAC used the information to attack her, she had already aired nearly 900 positive TV spots.

She’s also carried her decadeslong career as a postal inspector and then as a CIA officer into her work in the House. During her four years there, she’s built a reputation as a national security hawk who is unafraid to buck her own party and work across the aisle.

“One of the things with Rep. Spanberger I think is so appealing is her bipartisan work that she does and reaching across the aisle to get things done. And not getting caught up in … ‘Rs versus the Ds’, which I think the average citizen is pretty fed up with,” said local police chief Chris Jenkins, who’d also joined her a few weeks prior in Washington to promote a bill combating substance abuse.

“I can tell you, I worked with [former GOP Rep.] Eric Cantor… Got along with him well. His replacement, not so well,” Jenkins added, referring to former Rep. Dave Brat (R-Va.), a member of the ultra-conservative House Freedom Caucus whom Spanberger defeated in 2018.

The House Democrats’ campaign arm has strongly urged incumbents to forcefully respond to the GOP’s criticisms on everything from policing to critical race theory, pointing to internal polling and focus groups showing their own rebuttal can help sway voters. Rather than deny support for “open borders,” for instance, Democrats need to explain their “real beliefs for fixing the immigration system,” an outside firm told Democrats in a campaign presentation in February.

Those kinds of culture war attacks showed up in a big way in Virginia’s state elections last November, when the GOP clinched its first statewide victory there since 2009. The Republican candidate, now-Gov. Glenn Youngkin, seized on Democrat Terry McAuliffe’s record on crime, as well as a potent backlash over school closures and curriculum fights.

Now, Spanberger and her fellow battleground Democrats hope to avoid the same fate. And they’re not just worried about policing. Immigration has also become an issue in Culpeper, where police officers have been tasked with finding unaccompanied Central American migrant children who had been placed with sponsors in the town but since gone missing. 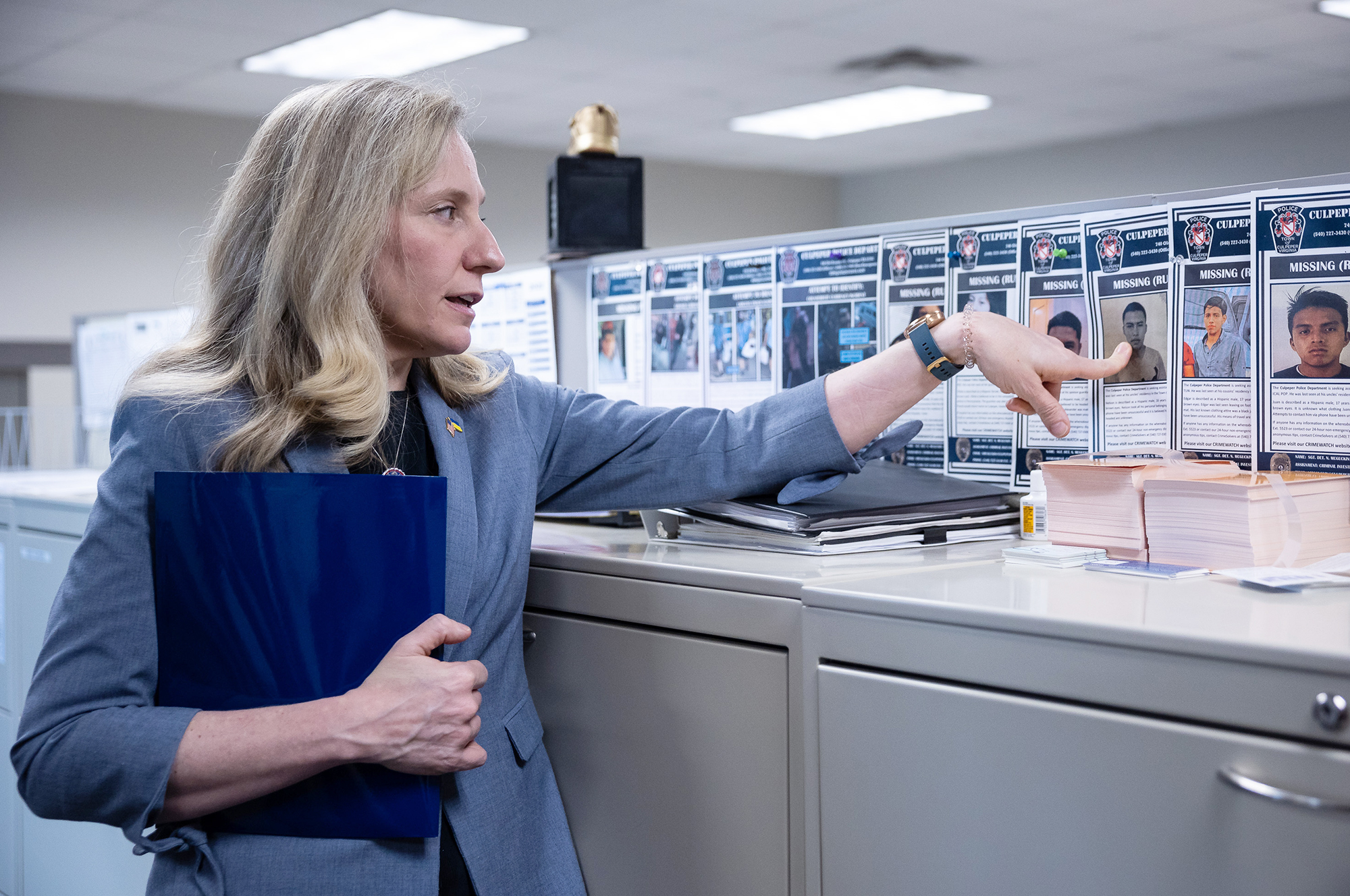 Spanberger called the problem a “breakdown” and, anticipating Republican attacks on immigration, she added: “It’s a political hot potato that frankly, some people don’t necessarily want to fix because you can motivate people by fear.”

Other battleground Democrats have acknowledged that some of their colleagues have shied away from talking about controversial topics like immigration or policing — in a way that could help Republicans in the long run.

“You should not be afraid to talk about it,” said Rep. Josh Gottheimer (D-N.J.), another swing-district Democrat promoting his recent work to support law enforcement. While he said there are some people on the “far extreme of our party” who have said there can’t be both justice and investments in law enforcement, he called it a “false paradigm.”

“You can ensure terrorists and gang members aren’t getting into the country, but also have a proper path to citizenship,” Gottheimer said. “There’s loud voices on the extremes on both sides that make it like you can’t actually have smart policy. What we need to do is show people there’s a way to do both.”

Spanberger is now running for her third term in a newly redrawn district. While it no longer includes her home of Henrico, Va., it will offer her slightly more favorable turf.

National Democrats see the new seat — whose voters favored Biden by 6 points in the last election — as competitive but winnable in a midterm that could be the party’s toughest fight in over a decade. Last cycle, Spanberger lost Culpeper County, roughly seventy miles southwest of Washington, D.C., by a lopsided ratio. But she’s still representing those voters in her new district and trying to make inroads. 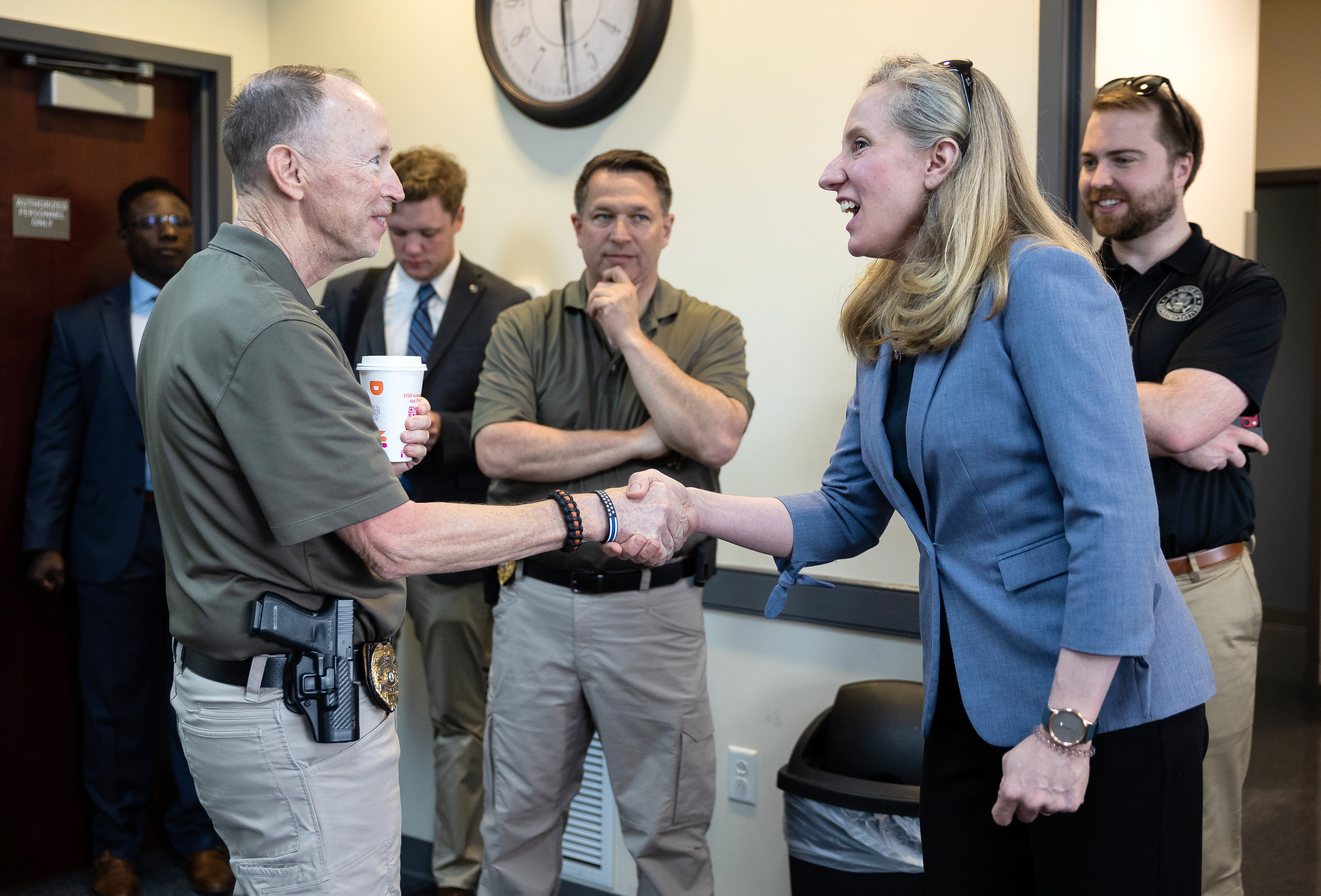 Spanberger has so far amassed a huge financial advantage over her roughly half-dozen Republican challengers, raising $1.05 million last quarter for a total of $3.89 million in the bank. But that fundraising advantage is likely to narrow after the June primary election. Stafford County Board of Supervisors Chair Crystal Vanuch boasted the largest fundraising haul out of the Republican field, with over $480,000 raised last quarter, though the majority of it was a personal loan.

Meanwhile, Spanberger is winning praise from some local leaders, such as Culpeper Mayor Frank Reaves Jr., who is an independent.

”She’s a hustler. She’s a great worker. She takes pride in the job,” said Reaves, who comes from his own long career in law enforcement.